skip to main | skip to sidebar

When telling my tatting mate about this I have referred to it as my "pink monster doily". I don't like pink much and never really have, even when I was a little girl I loved red but not pink. So why have I used that colour for this one, you might ask.
First of all I knew it didn't have to be either white or blue, it had to be something else. And I am trying to use some of those threads that have not really worked for me before, like the 5-6 large balls of Cebelia size 30 that a friend bought for me on a sale in Germany some years back. 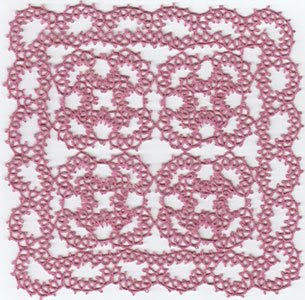 I don't like this thread I have used for yet another square, not just the colour but also because it breaks easily when I am closing the rings. It is not only a question of my tension which I know is tight, I also think the thread tangles or twists a bit or something when you make the rings and then they sort of lock when you are closing them. And if you really have to pull them to close them properly the thread will break now and then.
So often there's a sort of a gap when the rings have been closed and when I started the chains I had to make sure the first stitches were very tight. It might not be visible but I know it is like that and that is way too much. So I have better find a non-tatter to give this too, so noone will be able to see those things, roflol.
Yes Maureen, I do know you like pink, I am glad someone does then my struggle with this have not been done in vain.
-------------------------------------------------------------
Jeg har aldrig rigtig brudt mig om farven pink, alligevel har jeg brugt den her fordi det ikke altsammen skal være enten hvidt eller blåt. Og på en eller anden måde skal jeg jo have brugt de 6 store nøgler Cebelia #30 som en veninde en gang købte til mig i Tyskland. Men det har været svært at undgå nogle små mellemrum ved ringenes basis, fordi det er svært at trække ringene ordentligt sammen med denne tråd uden at den knækker. Det er ikke kun fordi jeg orkerer meget fast, det er også fordi tråden ligesom snurrer om sig selv og dermed låser. Godt det er overstået, for det var så hårdt for mit venstre håndled også.

Susanne, that is so lovely - it's one of the prettiest you have made! And I love the colou :)

This is lovely Dantatter. I will await text! Sleep well.

Oh my goodness! This is fabulous!

I'm not fond of pink either, but this is gorgeous!

Thank you to all of you for the very nice comments on my pink monster doily.

I love pink. I think it's beautiful. I think it's great that "The First Doily in June" is in pink. Regardless of if pink is or isn't a favorite of all tatters I think everyone will agree that the pattern is absolutely gorgeous.

Sorry to hear it gave you such troubles with the thread. It sure doesn't look like a monster, though.

Very nice! For all the troubles you had with your thread, you did a great job. I love the shape of the doily. It's quite unique. Where did the pattern come from or did you design it yourself?

Thank you Tattingchic, you are imagining there will be other doilies in June I reckon, roflol. ;-D
Steph, thank you for your kind words. No I am definitely not able to design such things, I am not sure but it might be a Jan Stawasz design.

adopt your own virtual pet!